Home Microplays Five Live-Action Films Based on the Stories of Dr. Seuss

Five Live-Action Films Based on the Stories of Dr. Seuss

In mocking the live action adaptation of Dr Seuss’s The Cat in the Hat, (a few weeks ago here at Crunchy headquarters), a great deal of research was done on Dr Seuss’s place at the Hollywood dinner table.  It turns out that there were actually five Dr Seuss books adapted to film by the major studios, but quickly shelved, when The Cat in the Hat did not live up to its financial or artistic expectations.

Through his extensive network of men’s room attendants, Crunchy has been able to obtain some of the dialogue of these scrapped and destroyed films, for this Fine Lines feature.  True, these movies will never see the light of day, but it’s encouraging to think that no one is off-limits in Hollywood’s continued quest to bastardize great literature, while at the same time converting excellent animation and illustration, into live-action perversion.

Fine Lines: Five Live-Action Films Based on the Stories of Dr. Seuss

SAM: (Emerging from the ocean) Damn you.  I’ve been to your rodent-infested house, your fox-ridden storage locker, took a locomotive through a hurricane, and was attacked by…what was it…?

(Later, a murmur from underneath moving sheets) 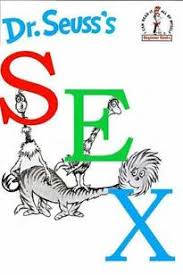 2)  The Lorax—In this eco-thriller, Peter Lorax, played by Johnny Depp, is forced to save his family orchard from the evil industrialist, John Once-ler, played by Randy Quaid, who is looking to rape the land for fun and profit.

LORAX:  I tell you I speak for the Truffula Trees!

ONCE-LER:  Well, I don’t speak that language, old man.  (Slowly pulling out a revolver and pointing it at Lorax) But I’ll tell you what language I do speak.  I can teach it to you with very little practice—I’ve already taught the Bar-ba-loots, the Swomee Swans, and the Humming Fish.

ONCE-LER: …Belong to the Once-ler family now! (He fires.  His voice lowers to a whisper) Cause everyone…needs…a thneed.

3) The Sneetches—This tense urban drama involves rival street gangs (the All-Stars, and the Shooting Stars) who compete for dominance, using gang symbols to project power and status.  Local tattoo and massage parlor owner Sylvester McMonkey McBean, known as “Beans,” and played by Ice T, finds himself in a dangerous position, working both sides against the middle.

(A sneetch known as Starbelly walks into Beans’ place of business)

BEANS: That star on your chest tells me different.

BEANS:  Not my problem.  All the sneetches in town are wearin’ the star.

MR WOCKET: (Over a loudspeaker. He speaks slowly, precisely, and methodically)  Detective Michaelson.  You are trespassing. Officer.

CLIFF: (Yelling out into the seemingly empty house) You killed eight people Wocket!  I think I’m ok to trespass.

MR WOCKET: And so you are. Detective.  But I didn’t kill those people.  I improved them.  Including your wife…

MR WOCKET: Oh, you’ll have your revenge, dectective. I’m sure you will.  But I’d be careful until then if I were you.  For example, right beneath your feet, is a vug, under the rug.

CLIFF: (He moves off the rug quickly) Oh god…no…

MR WOCKET:  And over your shoulder, in the curtain? Is a jertain.

CLIFF: (He flinches away from the drapes, panicking and jerking around with each word.) No, I…

MR WOCKET:  I wouldn’t come any closer to the staircase.  Somehow (he laughs) there are yeps…all over the steps.

MR WOCKET:  Did you have an accident, Detective?  Feel free to freshen up in my lavatory.  But be careful to mind the noothgrush. On my toothbrush.

(Dr Vladikoff and Dr. Wickersham enter Horton’s sparse room at the institution. They are grim)

HORTON: Oh dear God no, not the Beezelnut oil…

HORTON: A whole world lives on this acorn. (He holds it up) It’s not an acorn anyway—it’s a planet!  The Mayor talks to me all the time…please….

WICKERSHAM: We’ve talked about this, Horton. The sooner we take a break from…Whoville…the sooner you will get better. (To Vladikoff) Classic schizoid break, exacerbated by the drinking.

HORTON: (Babbling) Wouldn’t you…wouldn’t you have a beer or two or three (giggles) if a damn seed spoke to you…if the mayor was talking to you every day every damn day…shut up SHUT UP, I just wanna watch the tv, why can’t you just SHUT UP! I can’t I can’t I can’t I just…I just…..(He stops. Composes himself)  Doctor, you’re right.  It’s unfair for these people, for this Mayor, to put it on me—to make me their God. I can’t be a god.  I’m just…Horton.

HORTON: I’m going to do something I should have done a long time ago. I’m not their God. I’m…I’m meant to be… their Devil.  (He slowly and deliberately places the acorn on the ground and steps on, crushing it.

VLADIKOFF: (Raises his head from his notes)  Did you just hear something, Wickersham?

WICKERSHAM: (He pauses. Gulps) I heard nothing.