Australia didn’t want him anymore–they were tired of him, and still don’t like him.  Ask them.  So they shipped him to us. Dear God.

Paul Hogan came onto the scene in the delightful 1986 comedy, “Crocodile” Dundee, and brought with him everything necessary to properly understand the “down under” experience: Kangaroos, Boomerangs, Aborigines (kinda like black Indians), “G’day,” Shrimps on the “Barbie,” and of course, Crocodiles.  The American public responded to this non-threatening rube by cheerfully lifting a pint of Foster’s with him, before happily returning him to the Outback.  Now, all we have remaining of our former fascination with Australia is the Outback…Steakhouse.  And Bindi the Jungle Girl.  G’day, indeed.

This film, though a wonderful nostalgia piece, has difficulty holding up when re-viewed today.  In addition to the complete lack of chemistry between the two leads (she emotes like she’s on Broadway, while he does a Come to Australia commercial), which naturally developed into a real-life marriage, the movie is simply too goofy for its own good.  It’s like a “Dosage Friend”–somebody we like, but only in small doses because they inevitably become annoying.  The characterization is sloppy, and the charming plot begins to grate once the leads get to New York.  It’s at that point that I begin to Refuse to Suspend My Disbelief, as the Vegemite sandwich that was my lunch, churns inside my belly.

1) The Thong–Why would Linda Kozlowski, as Sue Charlton, wear a thong of this nature in the Outback, away from any beach, in a time when thongs weren’t even that popular, with a shady uber-macho foreign stranger, who has a demeanor so uncivilized and raw that he kills crocodiles with his bare hands?  Perhaps Kozlowski, a Julliard trained opera singer with no other claim to fame but this movie and marrying her first co-star that wasn’t an NYU film student, decided her terribly played character needed to better entice Mick Dundee, who is supposed to have never seen so liberated a woman, (though you’d think there might be a few loose gals up in the Northern Territories to service the lucrative poacher trade).  Perhaps the director just wanted us to see a fine ass.  Either way, this unrealistic scene winds up being Linda’s only proof that at one point she was something more than the wife of an old man.

A great ass, sure, but this explicit scene doesn’t seem to match the family-friendly tone of the film, does it?

2) Dundee in New York–First, there is no logical reason for bringing Mick to New York. It has nothing to do with her story.  And really, no reader would be interested in this.  Australia is not Mars.  We know the country exists. And in the Outback of Australia they are not as cut off from society as shown in this film.  Dundee’s Aboriginal friend wears jeans for god sake. Dundee and Wally’s business caters to tourists who inevitably must have shared something of the modern world with these “ockers.”  Confused by an escalator, Mick?  Well, they look kinda like stairs don’t they?  And they’re moving up, right?  Maybe just watch how a few people negotiate them, huh? And one can appreciate that he’s never seen a bidet before, but it seems he’s also amazed by the toilet.  The bar he frequents in Australia must have one, right? He screams down to Sue that, “It’s for washing your backside…” and she hears him from his open hotel window in the busy streets of New York below.  Uh huh.

Other examples: He washes his clothes in the bathtub, though The Ritz offers a free laundry service that Sue forgot to tell him about–probably just for her own amusement.  Also, Mick has never heard of the concept of a man dressing as a woman in Australia. Odd for a country that actually started as a giant floating jail.  You’d also think that out in the bush, men often act as women, either for convenience, or when they’re drunk.  Or both.

I swear this guy is Australian.

Oh, and Mick also asks the Black hotel doorman what tribe he’s from.  First, Dundee couldn’t possibly be that stupid.  Second, there’s no way he’d live after addressing a Black guy in that way.  He’s just lucky the doorman was Reginald VelJohnson, who would be so helpful to John MClane two years later in Die Hard. 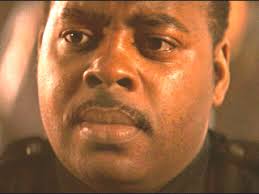 3) Newsday’s Budget–It’s explained that Sue Charlton’s father is an editor at the paper, so this nepotism must explain why she’s sent overseas with an unlimited budget.  Despite the fact that ’86 was the busiest year of the 80s, with terrorists, exploding space shuttles, and Mets World Series champions, Newsday spends the money to fly Sue to Australia, then travel to its interior.  They pay for a three day walkabout with Dundee.  They cover the costs to fly both of them back to New York, and for Dundee to stay at a luxurious hotel on top of Central Park.  This is all for a story about a guy who lied about having his leg bitten off by a crocodile.  Yeah, that’s pretty big news–especially his visiting New York, where the only crocodiles are located in the sewers.  It’s not even like she works for a major New York paper.  Newsday is a Long Island paper.  What’s the special significance of this story to the people of Long Island?  Oh, wait.  The people out there do look slightly reptilian.

4) The Subway Finale–Where is the subway so crowded in New York that you literally need to step on people’s heads to cross the platform (even though we can see that he’s actually walking on a riser)?  The sign indicates that they’re at 59th Street/Columbus Circle.  Sorry, it’s never even come close to being that crowded, especially with so many different subway lines rolling through there.  In short, no subway in New York is this densely packed.  And where’s the train?  Why is it taking so long?  If this many people have been building up on the platform (which is an open space with no benches, subway maps, stairs, or elevators), shouldn’t the train be rolling in any second now?  And trust me, no New Yorker coming home during rush hour gives a shit about who you love.  They just want your seat.

5) Richard–Kozlowski demonstrates exactly zero affection for her fiance, Richard.  It’s even unclear that they’re together till the end, as he also functions as her boss.  His jealousy of Dundee might make a little more sense if we had any idea of who the hell he was.  Then Mick punches him out in a restaurant, and nobody notices because he’s woozy, like a drunk.  Yeah, every time I’m drunk I look just like I’ve been punched in the face by a manly crocodile slayer.

6) Poaching–So Mick cares enough about Kangaroos to scare poachers away, but is himself a poacher of crocodiles?  You’d think that a man so in tune with nature would respect all of Mother Australia’s creatures equally.  It’s not like a kangaroo can’t kick your ass if it wants….

7) Dundee demonstrates Outback Skills–Thank god for Mick’s Australian survival skills.  Only an Australian Outback specialist would think to defeat a switchblade attack with a bigger knife. And only a boomerang-throwing Aussie would have the wherewithal to stop a mugger by throwing a can of food directly at the back of the fleeing crook’s head.

Check out the multiracial gang, led by a guy wearing a Thriller jacket a solid three years after it went out of style.