When popular television shows end, the final episode is often an event.  MASH had great success, and most long-running shows generally try to meet that artistic standard.  But crafting just the right thirty minute or one hour episode, that perfectly encapsulates the series, while at the same time providing it the appropriate punctuation mark, is a daunting task.  Recently, Crunchy both bribed and plundered, in order to obtain some early drafts of the finales of a few well-known shows.  Remarkably, they seem to improve upon the real endings.

Five Television Show Finales That Should Have Been

1) The Jeffersons–The government ate your piece of the pie.

LOUISE: George, the bank just called and said there was a problem with your taxes this year.

GEORGE: Don’t worry about that honky down at the bank. I got it covered Weezie.

GEORGE:  Tom and I sunk our savings into Charlie’s Bar…

GEORGE: …And Weezie, we’re gonna be movin’ back to Harlem unless Helen’s plan works…

GEORGE:  You’ve been spending too much time down at the Help Center.

GEORGE: Let’s just say that poor Charlie is gonna have a little fire downstairs in his bar…

“Lionel, you’ll get the other five thousand after you’ve done the job.”

NORM: Hey, shut up. I don’t have a snappy comeback right now. Sorry we can’t all laugh at my drunkenness today, but Cliff is outside on the steps with a g… (Cliff enters the bar holding a revolver) 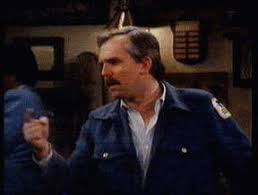 SAM:  What do you have there Cliff?

SAM: What is that, a six shooter Cliff?

CLIFF: Yeah, in fact, few people realize the six shooter was originally a seven shooter till…wait a second Sammie, you’re not gonna get me that way. In fact, that’s why I’m doing this, you people have been poking fun at me since I started comin’ in here. I’m too smart for ya, see, so you’re jealous. (To Norm) And frankly Normie, you know I’m a virgin.

CLIFF: Enough.  Postal workers are exactly 54% more likely to go on a shooting spree then firemen or paramedics.  Say goodbye to Cheers, you bastards!

(He opens fire on the crowd)

3) Seinfeld–George has finally had enough with baldness, unemployement, and his best friend Jerry.

ELAINE: Jerry, I got here as fast as I could.  George…committed suicide.

JERRY: Why do people say “committed” suicide?  It’s not much of a commitment, not like a dinner party or…

ELAINE: Didn’t you just hear me, George is dead.

JERRY: Why do people always seem a little excited to be the first one to tell you bad news?  You didn’t kill the person, in fact, your biggest accomplishment was to get here before Kramer.

KRAMER: (Entering quickly with a flourish while saying his line a split second after Jerry) George is dead.

ELAINE: I already told him.

ELAINE: Do you really wanna know?

KRAMER:  Do you think George would mind if I took his liver.

KRAMER: (With a flourish) But what if I need an extra liver? 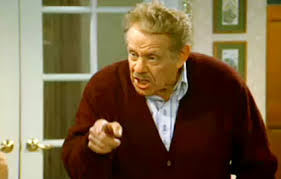 “My son doesn’t deserve a casket. CREMATE HIM!”

ROSCOE: (laughing)  We got you Duke boys now…

LUKE: Yeah, what is this, just another one of Boss’s tricks to get rid of us?

ROSCOE: You Duke boys sure think yer smart, don’tcha? Ol’ Boss Hogg don’t have nothin’ to do with this…

ROSCOE: Now jus’ hold on there Jessie, jus’ hold on there. I got an arrest warrant signed by a federal judge here that says your boys are wanted for a hate crime.  I ain’t alone, jus’ up the road Enos is playing Crazy Eights with three FBI boys.

BO: What are we supposed t’ have done?

ROSCOE: Do you boys remember that fight you got in with that feller down at The Boar’s Nest last month?

LUKE: Sure, he had his mitts all over Daisy!

ROSCOE: Well, he was colored, and now y’all are bein’ arrested for a hate crime.

LUKE: But we didn’t fight ’em because he was black!

ROSCOE: You Duke boys sure is dumb. When you drive away in a car with the stars and bars covering the entire roof, what do you think is gonna happen?

BO: Luke, we beeped the horn when we drove off.

UNCLE JESSIE: What’s wrong with that?

LUKE: You know “Dixie” plays when we honk.

ROSCOE: Yeah, that didn’t help the situation any.

5)  Lost–The flashbacks, flash-forwards, and alternate realities build to a point where the show actually becomes reality.

JACK: I know what’s happening.  I know why we’re all here.

KATE: What do you mean, Jack?

SAWYER: Don’t listen to him, Freckles.  He’s hasn’t helped us a lick since we landed on this damn rock.

JACK: We are actors doing a television show here in Hawaii.

KATE: Jack, what about the smoke monster, and the explosion? What about our friends dying?

JACK: The smoke monster is a special effect, and so was the explosion.  These people around us all the time with the headsets…

LOCKE: Are figments of your…

JACK: No! They’re production assistants.  Your name isn’t even Locke, it’s Terry O’Quinn–you did a guest appearance on JAG!

JACK: No one has died here. They are actors.  Look who I have here. (Harold Perrineau enters)

HAROLD PERRINEAU: I’m an actor just like you, Evangeline. See that huge trailer just beyond those trees. Craft services just put out a spread. You get your make-up done there everyday.  Haven’t you wondered about these large metal cameras that seem to follow your every move?

JACK: Ever notice that there are people constantly telling us where to stand, and what to say?