Home The Lists Music is Terrible Vanilla Ice Decoded…What Does “Word to your Mother” Really Mean?

Vanilla Ice Decoded…What Does “Word to your Mother” Really Mean?

As we approach the 21st anniversary of one of the most influential songs in history, perhaps it’s time to reflect upon the sage words of R. Van Winkle, lyricist and stone cold vanilla-flavored poet of our generation.  As one of the songs that introduced the awesome concepts of illegal sampling, MCs with the “Ice” moniker, and embarrassing white rappers, it’s finally time to give this ditty the analysis it deserves.

Video (above) for those who can’t seem to recall the greatness.

All right stop, Collaborate and listen

How does the word “collaborate” fit in here?  Does one really need to collaborate with others in order to listen to something? No, both stopping and listening are acts that can be performed alone.  In addition, “collaborate” implies you’re working with someone else on a particular endeavor.  While it’s reasonable to think that a person might need the support of a friend to get through a Vanilla Ice album, the artist himself certainly shouldn’t have to advise us of this.

Ice is back with my brand new invention

“Listen” and “invention” don’t rhyme, and every invention is brand new, you redundant bastard.

Something grabs a hold of me tightly

Then I flow like a harpoon daily and nightly

Flow like… a harpoon?  Does a harpoon flow? C’mon, it sort of cuts through the air and impales it’s target–“flow” is an utterly illogical word.  A whaler whose harpoon flowed, would not be working the decks of my whaling vessel.

Turn off the lights and I’ll glow

To the extreme I rock a mic like a vandal

Light up a stage and wax a chump like a candle.

If you rocked the mic like a vandal, wouldn’t you be literally destroying it? And without a mic, how will you be able to wax that chump?

Is that really the easiest way to kill my brain?  Nice simile–it’s always smart to compare yourself to a slimy toadstool.

Deadly, when I play a dope melody

You play no instruments.

Anything less than the best is a felony

Yup, listening to you is criminal–it’s a rape of my ears.

Love it or leave it, You better gain way

Love what or leave what?  America?  Your music? Oh, and he clearly says the word “gain” here when he means to say “give.”  I’d better “gain way”? Maybe you should gain way, asshole.

Hit the bulls-eye doing what?  Why do you keep commanding me to do nonsensical things?  And yeah, brag that your a lot more intimidating than terrifying Kid n’ Play, whom you’re obviously attempting to reference. 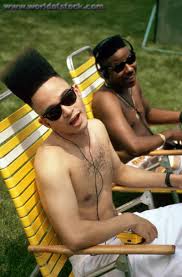 If there was a problem, Yo, I’ll solve it

Check out the hook while my DJ revolves it

How will you solve my problem? By busting intimidating rhymes? Break-dancing the Worm?

Now that the party is jumping

With the bass kicked in, the Vegas are pumpin’

Is it really wise to use the word “fake” in the first minute of this song, despite its convenient rhyme with “bacon,” a word you were obviously dying to shoehorn into this line.  Wow, and a whole pound of bacon?  You’re really hard-core, Vanilla.

Burning them if they’re not quick and nimble

I go crazy when I hear a cymbal

And a hi hat with a souped up tempo

Who doesn’t completely lose it when they hear a drum beat?  Especially if they’re as quick and nimble as Vanilla?  And haven’t you always been solo?  Oh, wait…the story part of the song is about to begin…

With my ragtop down so my hair can blow

How would your hair blow?  It’s been sprayed and styled to the stiffness of rhinoceros horn.

The girlies on standby, Waving just to say Hi

Did you stop? No — I just drove by

Kept on pursuing to the next stop

That block was dead

They’re not waving to say “hi,” Vanilla, they’re trying to tell you that your effeminate jacket is caught in your car door.  And who are you pursuing? Plus, if the block is dead, why not head back a block to where all the girlies were waving?

Yo — so I continued to A1A Beachfront Ave.

…because your “posse” just robbed them.

By “Rockman,” do you mean the old amplifiers, or are you referring to yourself as a “Rockman”?  Either way, nobody you know is driving a Lamborghini.

Jealous ’cause I’m out getting mine

Shay with a gauge and Vanilla with a nine

A nine? Right. Maybe if it’s your IQ.  Or shoe size.  Or if you’re being ranked from 1 to 100 on rhyming ability, personality, and style.

Reading for the chumps on the wall

This makes no sense, especially when you consider that Vanilla Ice is illiterate.

I grabbed my nine — All I heard were shells

Falling on the concrete real fast

Do you mean “rang out” like a bell? But wait, you didn’t actually hear the gunshots, because all you heard were shells hitting the concrete. Well, we all know how fast they fall.

Jumped in my car, slammed on the gas

So, after getting locked and loaded, and cruising to a bad part of Beachfront Avenue, your response in the face of trouble is to immediately flee?  Show some dignity Ice…

Bumper to bumper the avenue’s packed

I’m trying to get away before the jackers jack

Why would they jack you?  Didn’t you just get away?

Police on the scene, You know what I mean

They passed me up, confronted all the dope fiends

Ok, you’re suddenly back on the scene.  So why shouldn’t they pass you up?  A baby in an incubator is more intimidating than you.  Also, why would they confront dope fiends at a shooting?

If there was a problem, Yo, I’ll solve it

Check out the hook while my DJ revolves it

My town, that created all the bass sound

Enough to shake and kick holes in the ground

Everybody knows what a musical mecca Miami has always been…

Feasible rhymes that you can vision and feel

He doesn’t really describe his rhymes as “feasible,” does he?  That you can “vision”?  The word is actually…aww, the hell with it.

Conducted and formed, This is a hell of a concept

We make it hype and you want to step with this

Shay plays on the fade, slice like a ninja

Cut like a razor blade so fast, other DJs say, “damn”

If my rhyme was a drug, I’d sell it by the gram

And it would be the worst drug imaginable–akin to huffing your own farts.

Keep my composure when it’s time to get loose

Magnetized by the mic while I kick my juice

You couldn’t solve a game of Hangman.

Check out the hook while Deshay revolves it.

Yo man — Let’s get out of here! Word to your mother!

Be honest, vanilla.  You only gave my mother props because you know she could kick your ass.